As before, I will continue posting two railroad-themed movie reviews at the beginning of each month for your (and my) reading enjoyment.

Thus, to get your “free ice cream”, click on any of the links (including the above graphic) on this post which will whisk you to https://moreobscuretrainmovies.movie.blog/.

I first heard about White Christmas 1954 whilst watching another holiday movie, Christmas Vacation 1989. No trains in that one, but I was intrigued by one of Chevy Chase’s rants about “Bing Crosby tap-dancing with Danny f—ing Kaye”. It turns out there was only one movie in which Bingo and Danny appeared, White Christmas, and lo and behold there were several train scenes!

As is customary, I will concentrate on just the train bits but there might be a little cheesecake at the end. All in good taste, of course. Our movie’s title is derived from the famous 1942 holiday song for which composer Irving Berlin won an Oscar.

So pour yourself a hot cocoa or something stronger and enjoy this Christmas extravaganza. And yes, that’s Bing and Dan tap dancing next to the title card.

What could be more Christmasy than a SANTA Fe streamliner blasting by a stand of palm trees along the Pacific Ocean on its way to San Diego? Lots of sand and sunshine, but no snow, which begs the question, “How will Saint Nick land his sleigh?”

END_OF_DOCUMENT_TOKEN_TO_BE_REPLACED

Update 12-25-2019:  Thanks to readers Daniel & Matthew (see their comments below) who have helped identify Oahu Railway and Land Company #85 as the locomotive used for many of the shots in this movie.  You can read more about OR&L #85 HERE.

“Come all you rounders if you want to hear, a story ’bout a brave engineer…”. Alan Hale, Jr. stars as Casey Jones in this early television series which ran on independent station KTTV in Los Angeles for one season (1957-58).

I was able to obtain the entire series on DVD, but for the purposes of this review will concentrate on the pilot episode, “Night Mail” — which seems to have the most train action per square foot. Indeed, Night Mail features a race between two rival railroads AND footage lifted directly out of the 1950 movie, “A Ticket to Tomahawk”.

Sierra Railroad #3 and Rio Grande Southern #20 are the 4-6-0 steam locomotive stars in this action-packed show. Let’s take a closer look.

It’s amazing what you can do with a little trick photography. Here we see two versions of Sierra #3 racing itself with a split screen. In these shots, there always seemed to be a tree or something vertical to break up the “seam”. Different appliances (fake headlight, smokestack, etc.) completed the illusion.

END_OF_DOCUMENT_TOKEN_TO_BE_REPLACED 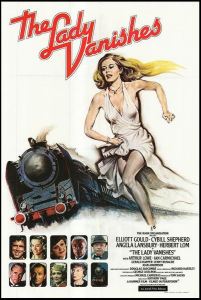 Oh, that white dress. Cybill Shepherd (Amanda) stars in this 1979 remake of Hitchcock’s classic 1938 movie. Filmmakers freshened the plot with a hearty dose of steam engine-powered runbys through Austria’s spectacular scenery. Cybill/Amanda is a brash, American heiress who strikes up a conversation with Miss Froy, played to English-nanny-perfection by none other than Angela Lansbury (a.k.a. Mrs. Fletcher).

The rub is that Amanda wakes from a short nap only to find Miss Froy has vanished — and no one on board will admit to her being on the train in the first place! The film takes place in pre-WW2 Germany, so you know those pesky krauts are involved. Who would want to off sweet, old Mrs. Fletcher, er….Miss Froy? (OK, Cabot Cove IS the murder capital of the planet, but I’m getting off track here.).

Both the Mrs. and I enjoyed this DVD for what it is — a light comedy/mystery with train scenes and bodacious scenery galore. Perfect for an evening’s entertainment. Let’s check it out!

As a railfan, I appreciated the effort filmmakers put into getting great scenic vistas as the train rolled along.

END_OF_DOCUMENT_TOKEN_TO_BE_REPLACED

Murder in the Private Car 1934 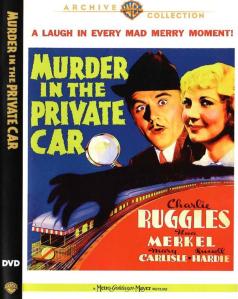 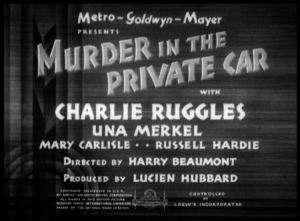 I first heard about this movie on one of my favorite blogs. The first part of the film is mostly on studio sets, but the big finish is just bursting with scenes along Southern Pacific Railroad’s Dunsmuir, CA yard and their Cascade Route.

The basic plot is…. a lowly, but perky, switchboard operator is discovered to be the long-lost daughter of a wealthy tycoon. Dear old Dad sends his private railroad car to pick her up and they finally meet on the platform at an intermediate station. That’s when things REALLLY start to get hairy as they travel together on the Pullman Observation.

Mount Shasta was a favorite backdrop for SP publicity shots including this tinted postcard. Shasta is also evident in this detail shot of the chime whistle and steam dome of SP #3721 F-5 class 2-10-2 Baldwin class of 1923.

END_OF_DOCUMENT_TOKEN_TO_BE_REPLACED 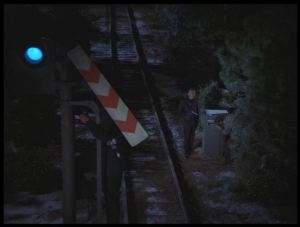 Hogan’s Heroes! One of my favorite TV shows as a kid growing up. I’m so old, I can remember watching some of them when they were first broadcast. I own the entire series (six seasons) on DVD — which I use for a night light. Pop a 30 minute episode in the DVD player and bonk, I’m fast asleep. But I digress.

This particular show from the sixth season was the story of Colonel Hogan (played by Bob Crane) and his gang’s attempt to rescue the beautiful resistance leader, code named Tiger, from the clutches of the eeeee-vil Gestapo, who are taking her to Berlin by train.

Most of the episode is a wonderful mish-mosh of wildly different railroad equipment, old railroad films and even a classic blow-up-the-train ending using models.

Some of the images are pretty dark (the action conveniently took place at night allowing filmmakers to use marginal railroad footage), so apologizes in advance. Enjoy! 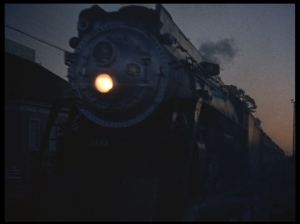 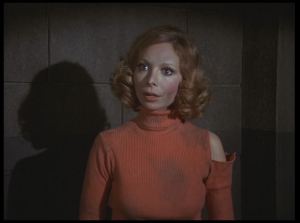 A beautiful Southern Pacific Railroad GS-class 4-8-4 leads a heavyweight passenger train. I can’t quite read the train number, but the engine is similar to the famous SP 4449.  ROWF! Arlene Martel stars as “Tiger” looking absolutely fabulous with the torn and soiled sweater. Now you know why Hogan was so keen on this rescue.

END_OF_DOCUMENT_TOKEN_TO_BE_REPLACED

Aside from the train bits, what I dig about this picture is Fred MacMurray’s Walter constantly referring to Phyllis as “Baby” — pronounced “Bay-buh” — sort of like how Elvis would say it. He calls her Bay-buh in practically every line of dialogue once the movie gets rolling. Tickles me.

A mundane scene from the 1940’s of porters and trainmen assisting passengers boarding a heavyweight train at night. But all is not as it seems. Just entering the shot, stage left, is Barbara Stanwyck, femme fatale, with a sordid scheme of murder afoot.

END_OF_DOCUMENT_TOKEN_TO_BE_REPLACED

Glenn Ford (as Jason Sweet) and Shirley MacLaine (as Dell Payton) star in this off-beat Western alongside Virginia & Truckee #11, The Reno.

Mostly filmed on the MGM back lot, “Sheep” (Baaaa!) is the tale of newcomer Jason Sweet (Ford) who shows up in the little town of Powder Valley announcing his intentions of grazing his huge herd of sheep in their pastures. The local townsfolk are not amused.

Of course, we’re here just to see the train scenes graced by V&T #11. Towards that end, The Reno makes a grand entrance as the opening credits roll, with a fine plume of black smoke and all identifying numbers etc. painted over in BLACK.

Let’s see what happens when Sheep-monger Ford comes up against local cattle baron, Colonel Stephen Bedford (Leslie Nielsen). This was YEARS before Nielsen made it big as Frank Drebin, Police Squad (in color). In fact, it’s hard to watch his acting in this picture, as you half expect him to break into deadpan comedy at any moment. He didn’t. He was the heavy in this film.

Look at them hair extensions on Shirley MacLaine! I really enjoyed her work in Oceans Eleven 1960 and particularly Guarding Tess 1994.

END_OF_DOCUMENT_TOKEN_TO_BE_REPLACED

Finally, I found a movie with one of my favorite actors (Mister Humphrey Bogart) on a train. Bogie (as Captain Rip Murdock) is escorting Sergeant Johnny Drake (played by William Prince) from New York to Washington DC where Drake is to receive the Congressional Medal of Honor.

It turns out that Sergeant Drake has a dark and nefarious past and thus has no interest in getting a medal along with all the publicity.

The train scenes occur in the first ten minutes of the picture, mostly on train “sets” with a few outstanding glimpses of Pennsylvania Railroad electric operations as backgrounds.

Take a ride on the Pennsy as it segues into a steamy and mysterious piece of film noir.

As the fireman of a GG-1 electric leans out of the cab for his portrait, Bogie displays his 82nd Airborne patch. This scene was filmed (matte shot) along Pennsy’s four track mainline in Philadelphia, Pennsylvania.

END_OF_DOCUMENT_TOKEN_TO_BE_REPLACED

From jolly, old England comes this tale of a small village trying to prevent the closure of their much-loved railway branch line. Stanley Holloway (the local bon vivant) and Godfrey Tearle (the Bishop) lead the townsfolk as they tidy up and operate the railway in their effort to win the mail contract (and bring in some much-needed revenue).

Opposing them are the eeeevil operators of the local bus company (who want the mail contract for themselves) and will stop at nothing to harass, delay or stop the plucky Titfield train.

Despite the good guys’ best efforts, their original set of equipment becomes unavailable (more bus company skulduggery), so they resort to “borrowing” some motive power from the local railway museum.

Filled with train scenes from start to finish, I had a difficult time pruning this down into something resembling a basic review. Pip pip, cherrio — Ship shape and Bristol fashion! And of course, “They’ll always be an England”.

Purloined in the dark of night from a nearby museum, the Titfield Thunderbolt once more takes to the rails in triumph.