I first heard about this RKO Pictures movie in the book, Diesels West! by David P. Morgan  (Kalmbach Publishing, 1963, LOC #62-19987). On page 64, there is a picture of the Burlington Railroad’s original 1934 streamliner, Pioneer Zephyr, with a Silver Streak nameplate being filmed with crew, camera and mike booms visible.

SPOILER ALERT !!! Plot outline below:
———————————————————————————————————
The book states on pages 55-56:
“In September 1934, No. 9900, temporarily renamed the Silver Streak, traveled to Hollywood to star in an RKO film of that title. Wallace W. Abbey wrote in Trains Magazine that “all characters, including the train, lived happily ever after.” The picture’s plot unfolded like this: Handsome young designer, in love with railroad president’s daughter, tries to sell president on newfangled streamlined train (i.e., the Silver Streak, alias the Zephyr) but is rebuffed…Train is built but at first experiences difficulty making 40 miles per hour and is ignominiously overtaken by steam engine on freight train.

Streamliner is on display at the (1934 Chicago Railroad) Fair when president’s son, at work on new Boulder Dam, contracts polio, requires an iron lung (the acme of medical science in 1934)…Silver Streak races lung across continent even as designer and foreign spy (who wants secret of two-cycle diesel) battle each other for controls in the cab (RKO’s script conveniently overlooked deadman’s pedal, which would have prevented the Zephyr from running wild with nobody at the throttle)…Hero overcomes adversary, delivers iron lung (which saves president’s son), sells streamliner to railroad, wins daughter’s hand in marriage.”

This film is not to be confused with the 1976 20th Century Fox picture Silver Streak, starring Gene Wilder which was filmed in Canada using Canadian Pacific Railway equipment from The Canadian.   For years, I was unable to find anything further on this 1934 picture until the internet came along (Three Cheers for The Internet!!!).

I purchased my copy here: http://stores.ebay.com/EMPORIUM-PICTURES

The Emporium Pictures link above sells quite a few old time railroad movies and is a great resource. I’ve also purchased the movies Union Station and Titfield Thunderbolt from this seller and have been very satisfied with his merchandise. 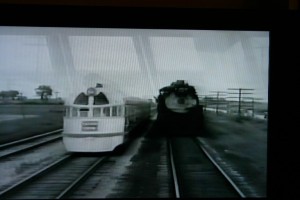 Webmaster, Blogmaster, Ferroequinologist - Lindsay Korst works for a nationwide home improvement center after a 20+ year career supporting computer users. A resident of the Seattle area since 1976, he has had a life-long interest in railroads, particularly those in the Pacific Northwest. He is an enthusiastic participant in the Great Northern Railway Historical Society. He and his wife reside in Redmond, Washington.
View all posts by Lindsay Korst →
This entry was posted in Uncategorized and tagged Burlington Railroad, Kalmbach Publishing, Pioneer Zephyr, RKO Radio Pictures, Silver Streak. Bookmark the permalink.

3 Responses to The Silver Streak 1934