Posted on September 1, 2014 by Lindsay Korst 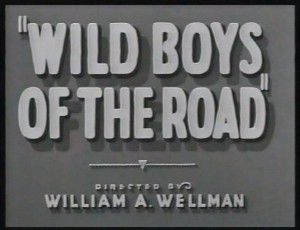 A fellow from Arizona was kind enough to send me a copy of this movie on DVD after reading my original Obscure Train Movies website. I had never heard of it before, but a good chunk of the picture features 1930’s depression-era railroading on the Southern Pacific Railroad.

It tells the story of thousands of down-on-their-luck teenagers who wind up riding freight trains in search of none-to-be-found employment. Being a Warner’s picture, there’s lots of action and raw Lord-of-the-Flies type debauchery. There’s even a rape scene with vigilante justice dispensed promptly.

Amidst all the carnage, we get a close-up look at what appears to be an SP reefer  refrigerator car) yard with a nice assortment of SP, Pacific Fruit Express, Western Pacific and Union Pacific box cars.

The filmed scenes are remarkable for the many kids riding on top of boxcars and bailing off as the trains are moving. Imagine filming  that in this day and age. They must have used quite a few stunt doubles.

There’s only one actor in this picture you may have heard of. Do you recognize him in the picture below? That’s a very young Sterling Holloway, better known as the voice of Winnie The Pooh.
http://www.imdb.com/name/nm0001359/

Wild Boys of the Road is not available for purchase, AFAIK, but I  believe it plays occasionally on the TCM network.

Webmaster, Blogmaster, Ferroequinologist - Lindsay Korst works for a nationwide home improvement center after a 20+ year career supporting computer users. A resident of the Seattle area since 1976, he has had a life-long interest in railroads, particularly those in the Pacific Northwest. He is an enthusiastic participant in the Great Northern Railway Historical Society. He and his wife reside in Redmond, Washington.
View all posts by Lindsay Korst →
This entry was posted in Uncategorized and tagged Pacific Fruit Express, Southern Pacific Railroad, Sterling Holloway, The Great Depression, Wild Boys of the Road. Bookmark the permalink.