Film Noir on rails!  This surprisingly well-done “B” picture tells the story of a Los Angeles detective tasked with bringing a gangster’s wife West to testify before a grand jury.  The mob is on to them, so elaborate steps are taken to hide the woman from detection during the overnight train journey.

Starring Charles McGraw (Det. Sgt. Walter Brown) as the cynical gumshoe, he must ensconce Marie Windsor (Mrs. Frankie Neal) in an adjacent compartment in an elaborate game of hide and seek.  The rub?  McGraw’s partner gets knocked off early on and Mrs. Neal is a difficult, smart-mouthed shrew.

SP 4412 GS2 class 4-8-4 steps out of a tunnel somewhere along Espee’s “Coast Line” between the Bay Area and Los Angeles. 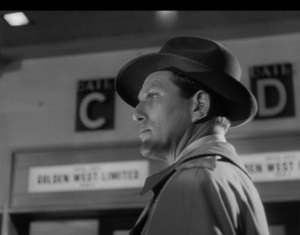 This picture uses stock footage of exterior train runbys — including a Pennsy K4 out of Chicago (which would be headed EAST, not West).  In addition, a 12 minute stop at “La Junta” would have been on the Santa Fe Railway, not SP Lines.

Quibbling differences aside, the onboard action is confining, tense and exciting.  For railfans, there’s a great look at Southern Pacific Railroad passenger operations both onboard and trackside in the early 1950’s.  This was how much of America traveled in the postwar era. 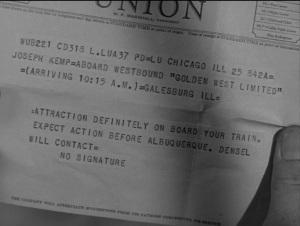 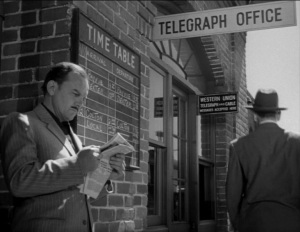 Western Union telegrams figure prominately in the story; Check the Time Table next to one of the bad guys outside the Telegraph Office at the La Junta stop. 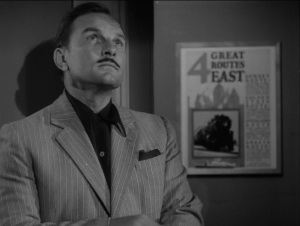 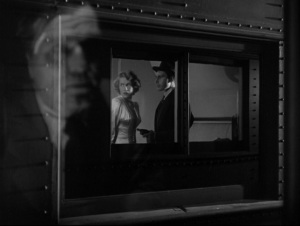 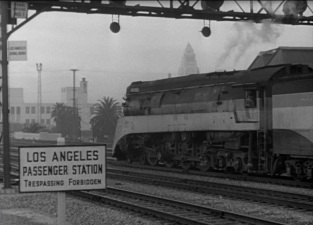 The cops are after their hot rod Lincoln!; Another GS class Daylight locomotive backs into Los Angeles Union Passenger Terminal.

Filmed in just 13 days and on the cheap, The Narrow Margin is an example of film noir at its best.  Plenty of red herrings and a twist at the ending will keep you guessing.  Enjoy!

Webmaster, Blogmaster, Ferroequinologist - Lindsay Korst works for a nationwide home improvement center after a 20+ year career supporting computer users. A resident of the Seattle area since 1976, he has had a life-long interest in railroads, particularly those in the Pacific Northwest. He is an enthusiastic participant in the Great Northern Railway Historical Society. He and his wife reside in Redmond, Washington.
View all posts by Lindsay Korst →
This entry was posted in Uncategorized and tagged Atchison Topeka and Santa Fe Railroad, Film Noir, Jacqueline White, La Junta, LAUPT, Marie Windsor, RKO Radio Pictures, Southern Pacific Railroad, SP Daylight, The Narrow Margin. Bookmark the permalink.

5 Responses to The Narrow Margin 1952