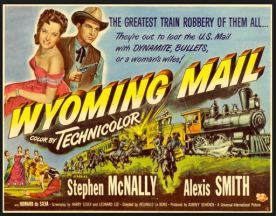 Stephen McNally (as Steve Davis) and Alexis Smith (as Mary Williams) star in this “tribute” to the beginnings of the Railway Post Office (or RPO). The Union Pacific Railroad is having trouble out in Wyoming with bandits robbing the mail from trains. Armed guards, the US Marshall’s office — no one can seem to stop the pillage. Enter Steve Davis — sent in as a troubleshooting, two-fisted, rip-snortin’, undercover government agent to catch and foil the train robbers.

Train scenes were mainly filmed on the Sierra Railroad using locomotives #3 and #18. As western pictures go, this one is rather bloodthirsty with practically everyone getting shot at some point. The big hullabaloo at the end features a baggage car the bad guys blow up with dynamite. As in many movies of this type, train scenes occur at the beginning and the end with just your standard oater western action inbetween.

Will the mail finally get through? Let’s find out!

Everybody’s shooting somebody in the finale of Wyoming Mail. Even the engineer of Sierra #3 takes a pot shot at the bad guys. 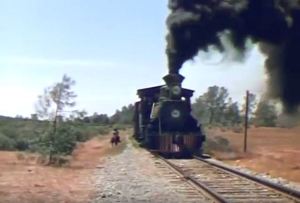 Inside the RPO car, clerks sort the mail as their armed escort downs his coffee and the train (led by Sierra Railroad #18) trundles through Wyoming. 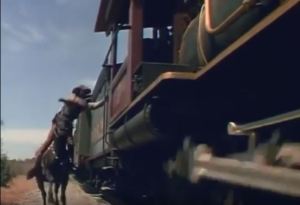 Great shots as a masked bad guy comes alongside and boards the engine.

The bandits shoot it out with the passengers whilst the RPO crowd shoots back.

I dare say this scene was later ripped off in 1969’s Butch Cassidy and the Sundance Kid. 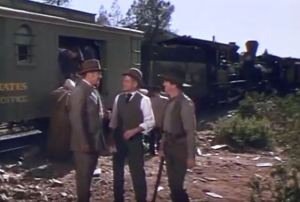 The aftermath of the holdup. Management is not pleased. It’s time to call in Steve Davis to go undercover. In front of a map of the lower 48 (yes, I know — eventually the lower 48), Steve gets his briefing.

Steve wastes no time heading to the trouble spot. At the saloon, he chats up Mary the saloon torch singer, bad guy’s confidant, and possible hooker (but with a heart of gold).

Much, MUCH plot left off here… 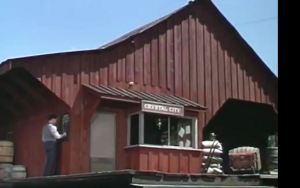 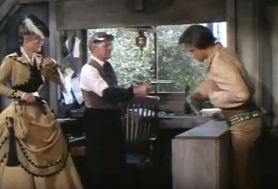 Nice little depot shot at “Crystal City”; Geez even the telegrapher is a crook! Whipping out a six shooter, he guns down Steve’s sidekick Indian Joe as Mary looks on in horror. This little incident triggers Mary’s up-to-this-point-dormant heart of gold and henceforth, she’s on the side of the good guys.

Meanwhile, Steve has infiltrated the gang and climbs a telegraph pole trackside to tap into the line. 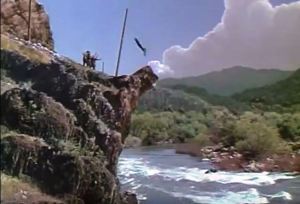 Betrayed! The Boss rides up and informs his henchmen that Steve is a G-Man! (notice the portable telegraphy set between the rails) As the crew takes pot shots at him, Steve swan dives 50 feet into the nearby raging river (yeah, right).

They fall for this every time. Two of the bad guys flag the train down; The gullible engineer (striking a classic pose) complies and stops his locomotive. 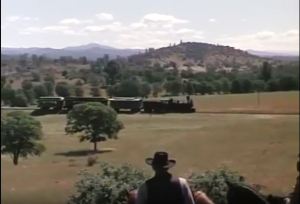 A couple nice shots…first the little train rolling through Tuolumne County, California; second a close up of Sierra Railroad #3. 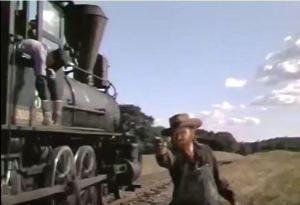 More carnage. The engineer slumps out of his cab as a bad guy shoots down the hapless conductor.

Although this explosion is not as spectacular as earlier in the movie, it does blow the door off the baggage car; soon the henchmen are collecting their ill-gotten gains.

Nice view of the wooden coach — looks like some sort of “Omaha Line” logo near the horse’s head; Frontier justice to the rescue! #3 comes rolling down the tracks backwards with a well-armed posse on board. 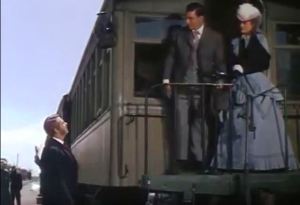 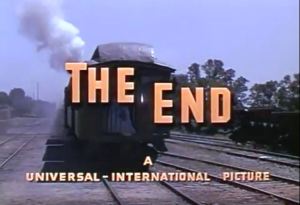 Sierra Railroad depot shots for the finale. Hero Steve is congratulated and dispatched to his next assignment with his lovely bride Mary in tow.

Meh, not a bad little train picture. It’s always a pleasure to see Sierra RR steam in action. Despite the high body count, Wyoming Mail delivers the mail eventually and portends 100 years of Railway Post Office service. “Neither rain, nor snow, nor bandits on horseback….”

Webmaster, Blogmaster, Ferroequinologist - Lindsay Korst works for a nationwide home improvement center after a 20+ year career supporting computer users. A resident of the Seattle area since 1976, he has had a life-long interest in railroads, particularly those in the Pacific Northwest. He is an enthusiastic participant in the Great Northern Railway Historical Society. He and his wife reside in Redmond, Washington.
View all posts by Lindsay Korst →
This entry was posted in Uncategorized and tagged Alexis Smith, Omaha Road, Railway Post Office, Sierra Railroad, Sierra Railroad #18, Sierra Railroad #3, Steam Locomotive, Stephen McNally, Union Pacific Railroad, Universal Pictures, Wyoming Mail 1950. Bookmark the permalink.