Posted on September 4, 2016 by Lindsay Korst

OK, this one’s pretty bad. Tim Conway and Will Geer star in this painfully unfunny comedy with railroad overtones. Indeed, the railroad bits are the only interesting thing about the picture which gives us a look at yard operations on the Western Pacific Railroad, as well as a fabulous collection of vintage Lionel model trains. Both WP and Lionel received a screen credit for their contributions.

The gist of the movie is bumbling Vernon Praiseworthy (Conway) is the last living relative of zillionaire Choo-Choo Trayne (oh, brother…) played by Geer. Vernon must prove himself worthy by hoboing to Seattle and back via freight train before inheriting Trayne’s transportation empire.

Let’s um…just concentrate on the train bits and leave it at that!

The opening train scenes occur about 12 minutes into the movie. Vernon is summoned to the mansion of billionaire Choo-Choo Trayne. 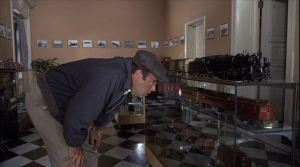 Conway looks over more of the pristine Lionel models.

Modern era (well, 1977) Lionel layout from the side and above. 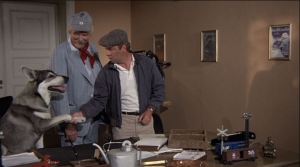 Vernon meets Bo and Trayne for the first time. Notice the Louisville & Nashville (blue) and Union Pacific (brown) box cars on the desk along with other railroad paraphernalia.

The tower in the SN picture above makes me think the WP yard scenes were filmed in Oroville, California.

Vernon seemingly unable to hoist himself up into the box car (a running gag); Note the old style Western Pacific “Feather River Route” logo on the side of WP 21121. 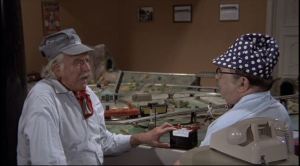 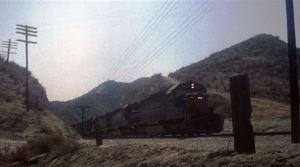 A trio of EMD SD39 locomotives (special duty, six axles, 2300 horsepower, turbocharged  V12) grind along somewhere in California with Vernon/Conway’s train. Unfortunately for him, this train is bound for El Paso, Texas, not Seattle!

A brakeman comes forward from the caboose to tell Vernon he’s headed in the wrong direction; Trying to get back where he started, Vernon resorts to hitch-hiking along the tracks. I believe that is a concrete SP-style telephone booth for crew use in the background.

Here I leave out a tremendous amount of plot. (Vernon is picked up and falls in with crooks planning an unbelievable Chinese dog-napping scheme). This consumes most of the picture. No trains shown, so we’ll skip right to the end of the flick.

Vernon receives a letter from Trayne – with Trayne’s head popping up and reading it — EWWW! 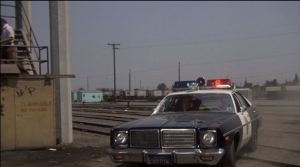 This time Vernon’s got a police escort to trackside at the yard tower; With his usual fumbling around, the train leaves without him and he gives chase. Again note the “Feather River Route” emblem on his “side door pullman”. 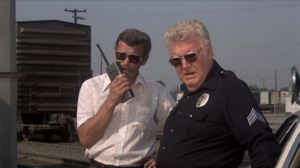 Vernon winds up running to catch the train again. The officer and yardmaster have had enough and radio the head end to stop and back up.

Finally the yardmaster and the cop hoist Verne up into the box car as the credits roll. Hmmm…I didn’t know General Mills owned Lionel. I wonder if they still do?

According to Wiki, Something called Lionel, LLC is now the owner.

So there you have it. The movie, frankly, stinks. The train factor is decent enough with Lionel models and WP/SP railroad action saving the day.

Here’s what IMDb has to say about The Billion Dollar Hobo:
http://www.imdb.com/title/tt0077238/

Webmaster, Blogmaster, Ferroequinologist - Lindsay Korst works for a nationwide home improvement center after a 20+ year career supporting computer users. A resident of the Seattle area since 1976, he has had a life-long interest in railroads, particularly those in the Pacific Northwest. He is an enthusiastic participant in the Great Northern Railway Historical Society. He and his wife reside in Redmond, Washington.
View all posts by Lindsay Korst →
This entry was posted in Uncategorized and tagged Kromer engineer cap, Lionel, Metro-Goldwyn-Mayer, Sacramento Northern, Side Door Pullman, Southern Pacific Railroad, The Billion Dollar Hobo, Tim Conway, Western Pacific Railroad, Will Geer. Bookmark the permalink.

1 Response to The Billion Dollar Hobo 1977