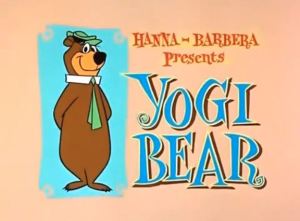 A miniature railway has been installed in Jellystone Park for the tourists. Complications arise when Yogi Bear (voiced by Daws Butler) and Boo Boo (voiced by Don Messick) hitch a ride on the train, much to the displeasure of Mister Ranger.

No pic-a-nic baskets are stolen in this episode, but Yogi proves once again he’s smaaaaarter than the average bear (he figures out how to drive the train).

Let’s take a glance at this Hanna-Barbera quickie. Many fascinating and related links at the bottom of my review — yay-hay-hay!

Much to my father and brother’s dismay, I grew up enjoying cartoons like this — usually on nice, sunny days when I SHOULD have been outside playing rugby or something. But I digress. I always liked Yogi’s hat — a sort of modified Buster Keaton pork pie for that 1920’s collegiate look. Boo Boo looked very natty in his bow tie. 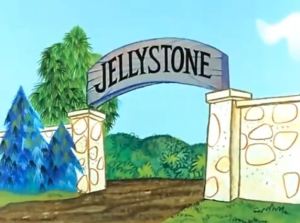 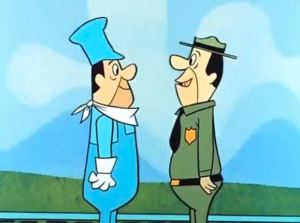 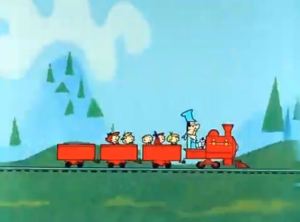 It’s another beautiful day in Jellystone Park; The train ride has steam up and ready to pull some kiddies along the track; Ranger Smith talks to the Engineer about keeping the ride, if successful (it was installed on a trial basis); Soon it’s, “All Aboard!”, and the train is off through H-B’s minimalist background. 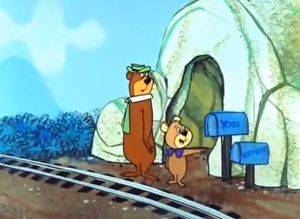 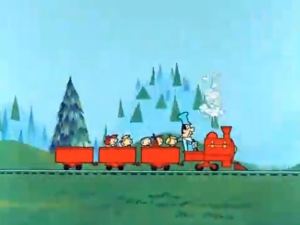 The train’s whistle and rumble has awakened Yogi and Boo Boo. They come outside their cave to investigate. The whistle sound was reused in the Flintstones as the time-to-go-home horn at the quarry. The train’s motion is wire brushes on a snare drum like from the Petticoat Junction song.

The kids are excited because the Fred Flintstone-lookalike Engineer has told them they’ll go around again a second time.

As the three car train sets off, Yogi and Boo Boo have climbed aboard.

Spoilsport Mister Ranger races after the train and yanks Yogi out of the car (with a pair of extra-long arms). Yogi thinks Ranger Smith was just trying to climb aboard. 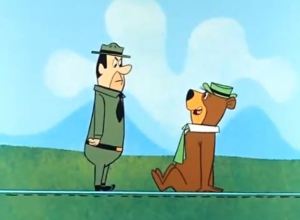 Ranger Smith lectures Yogi that NO animals are allowed on the train (not even antelope or deer); Meanwhile, Mister Engineer is having his lunch — leaving the ride unattended. 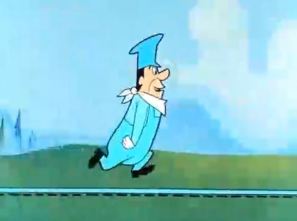 Seeing no one around, Yogi climbs into the engine — fiddles with the controls and is soon off down the track; The Engineer hot foots along in pursuit.

The engineer throws the switch to “derail” the engine, but Yogi keeps on going. 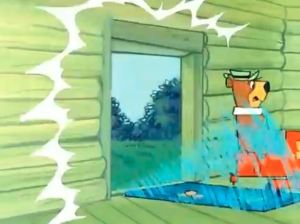 Running wild, Yogi smashes through the Ranger Station picking up Ranger Smith on the boiler. 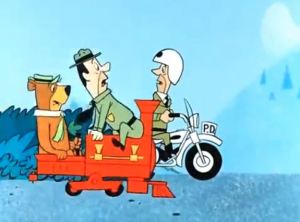 Yogi/Ranger find themselves dodging traffic on the freeway; A motorcycle cop starts to chase them but gives up as, “everybody down at the station would just laugh”. 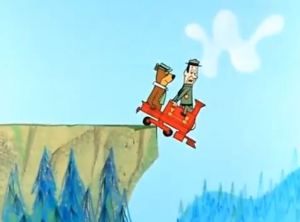 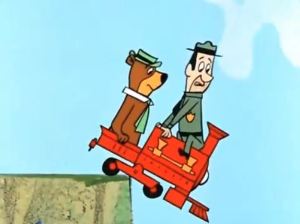 The engine finally runs out of steam — precariously balanced on the edge of a cliff. Mister Ranger starts to lecture Yogi again until he realizes he will plummet if Yogi were to get out of the cab. With a big chuckle, Yogi negotiates future train rides and other goodies for himself as the credits roll.

As promised, here are some interesting links you may wish to follow:

This guy has a wonderful blog about Loco Locomotive — from the angle of its’ artwork backgrounds. Each to his own!:

Here’s a copy of the cartoon online (as of July 2018):
https://www.dailymotion.com/video/x6jx0zu
Here are a couple local-to-me miniature railways I’ve enjoyed riding. The third one (Train Town) is the most elaborate set up I’ve ever seen — down in Sonoma, California.

There was even a recent movie made which was quite faithful to the original cartoon — and it even has a brief train scene!

Apparently, there is a HUGE network of Jellystone Parks around this great nation of ours (AND in Canada). The closest one to me is in Missoula, MT.

Here’s what IMDb has to say about Loco Locomotive:
https://www.imdb.com/title/tt1544505/

Webmaster, Blogmaster, Ferroequinologist - Lindsay Korst works for a nationwide home improvement center after a 20+ year career supporting computer users. A resident of the Seattle area since 1976, he has had a life-long interest in railroads, particularly those in the Pacific Northwest. He is an enthusiastic participant in the Great Northern Railway Historical Society. He and his wife reside in Redmond, Washington.
View all posts by Lindsay Korst →
This entry was posted in Uncategorized and tagged Boo-Boo, Daws Butler, Don Messick, Flintstones, Hanna-Barbera, Jellystone Park, Loco Locomotive 1961, miniature railway, Mister Ranger, Ranger Smith, Yogi Bear. Bookmark the permalink.