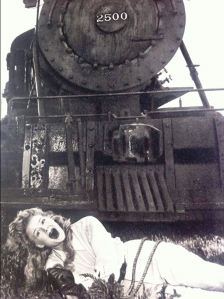 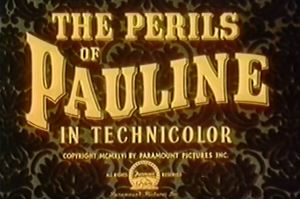 Actress Betty Hutton is the damsel in distress in this publicity still, tied to the railroad tracks in this post-WW2 Technicolor remake of the old 1914 Perils of Pauline silent movie serials.

This is the biopic of actress Pearl White (played by Hutton) which includes some spectacular train scenes being filmed in color. Let’s check it out! 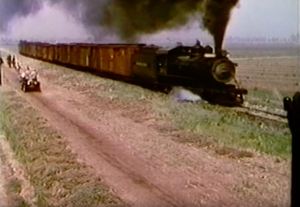 Espee #2500 gallops along under a tremendous plume of black smoke with camera car and horseback riders alongside. According to IMDb, this scene was filmed in the San Fernando Valley of California (which is probably all houses and strip malls now).

Apologies for the fuzziness. Perils of Pauline is in the public domain and I reviewed a copy off of Youtube. 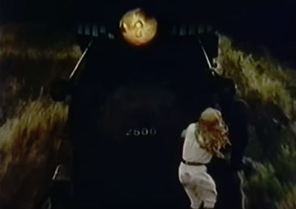 The film begins with SP #2500 rushing along as Pauline, the hero and the villain duke it out on the front pilot of the locomotive.

The villain has her by the throat mere inches from the churning wheels! WILL she escape certain death? Find out next Friday!

Our next railroad scene is the classic and cliched “tied to the train tracks” bit. Except that, Perils of Pauline 1914 never included such a scene. No matter. A staked-down and trussed up Pauline screams for help as the smoking locomotive races towards her. How will she get out of this one? 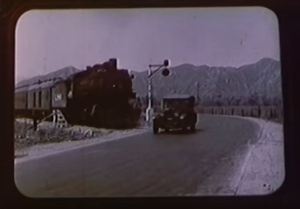 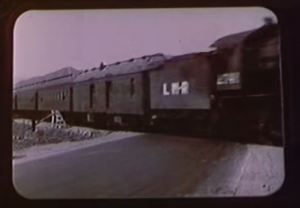 In yet another railroad scene, we find Pauline/Hutton driving a flivver across the tracks right in front of an onrushing train!

I’m thinking this might be footage lifted from another movie. This time the engine appears to be SP #2748 with “L M-R” lettering on the tender, pulling a consist of heavyweight passenger cars. Another curious item is the “wig-wag” crossing signal is not operating (swinging back & forth). 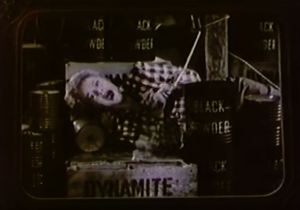 Always screaming. Always in danger. None of these are railroad-related, but I couldn’t resist including these classic vignettes of peril: Spikes lowering; the whirling buzz-saw and a room full of black powder and dynamite! 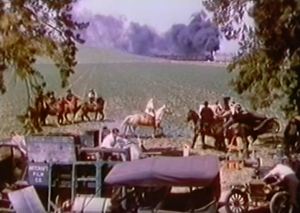 Okay, back to the color. In the movie’s final train scene, it’s location shooting out in the aforementioned San Fernando Valley. As the movie train spews out an impressive amount of black smoke (DANGER!), Pauline/Hutton is on horseback ready to give chase.

SP #2500 with a string of outside-braced box cars and caboose trundles along; the camera car paces the freight cars as Pauline is chased by the villains. 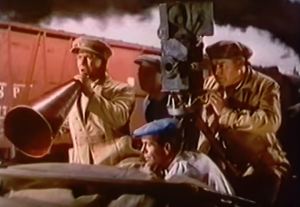 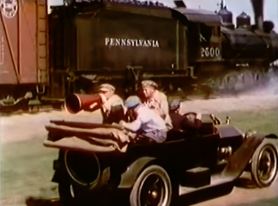 Great view of the camera car – notice the locomotive tender has been lettered, “Pennsylvania”; Pauline is about to draw her gun and shoot at the pursuing bad guys. 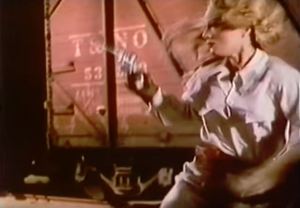 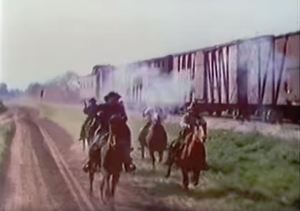 Filming with rear-screen projection of the train; Next to a Texas & New Orleans (T&NO – an Espee subsidiary) boxcar, Pauline returns fire. 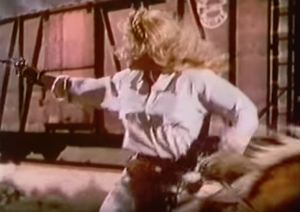 Now shooting beside an SP boxcar, Pauline is starting to pick off those henchman one by one. Best view of the caboose. Finally the director tells Pauline to go climb on the train! 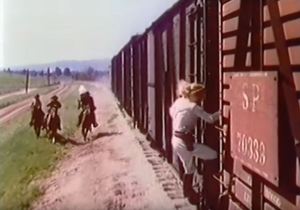 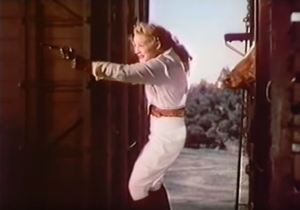 Filming now moves to a camera hung off the side of the train; with the cowpokes still in pursuit, our heroine hoists herself up next to SP stock car #70338; climbing up ladder, she shoots back at the varmints. 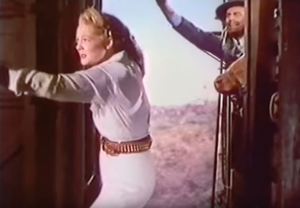 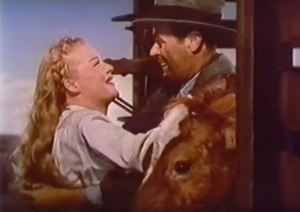 What’s this? Why it’s an old friend from her theater days hoboing on the movie train! A happy reunion is the result with a moo moo cow looking on. Right in the middle of filming. CUUUTTTTT!!!!!!

Thus concludes the train scenes for The Perils of Pauline.

This movie was a hoot to view. I left out a great deal of plot because, well, you know, no trains. If you’d like to see it yourself you can find it on Youtube HERE:

Here’s what IMDb has to say about The Perils of Pauline:
https://www.imdb.com/title/tt0039698/

Webmaster, Blogmaster, Ferroequinologist - Lindsay Korst works for a nationwide home improvement center after a 20+ year career supporting computer users. A resident of the Seattle area since 1976, he has had a life-long interest in railroads, particularly those in the Pacific Northwest. He is an enthusiastic participant in the Great Northern Railway Historical Society. He and his wife reside in Redmond, Washington.
View all posts by Lindsay Korst →
This entry was posted in Uncategorized and tagged Betty Hutton, damsel in distress, Melodrama, Paramount Pictures, Pearl White, Southern Pacific Railroad, Texas and New Orleans Railroad, The Perils of Pauline, tied to the tracks. Bookmark the permalink.