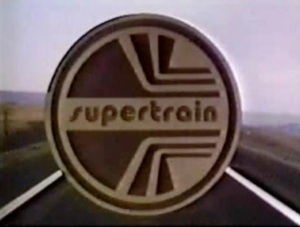 How did I miss this late-70’s movie on rails?  NBC invested big bucks in promoting and creating this pilot movie and just eight TV episodes — none of which I ever saw when it first came out.  Viewing the 2 hour pilot movie, it becomes clear why NBC decided to quietly bury the series and hope no one would notice.  It is 120 minutes of corny, over-acted, disco-soiled dreck.  Oh, you bet your sweet patootie, this is an obscure train movie!

Supertrain – Express to Terror takes place on board an “Atom-Powered, Steam-Turbined Machine” which travels from Grand Central Terminal in New York City to Los Angeles in 36 hours.  It is wide WIDE gauge with the rails appearing to be 10 – 12 feet apart (instead of the normal 4′ 8 1/2″).  The train is double decked and features a disco, bar, swimming pool, exercise car with sauna and starkly-lit bedroom suites for all the passengers. 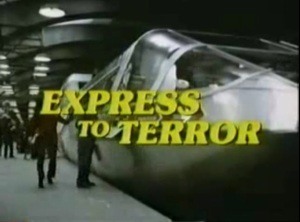 Disclaimer:  Sorry for the fuzzy pictures.  Best I could do with my DVD screen captures… 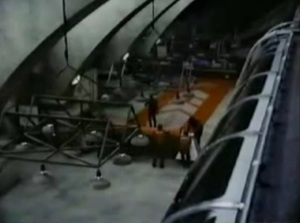 In a nod to New York Central’s 20th Century Limited, they roll out the red carpet at G.C.T. for Supertrain; Conductor Edward Andrews howls through his wretched rendition of, “All Aboarrrrrrd!”.  He sounds like a lovesick moose with a sore throat. 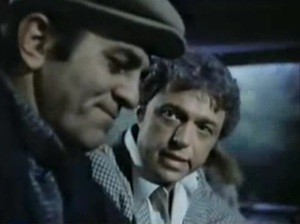 “Dandy” Don Meredith (with Steve Lawrence) turns in the most believable performance as he is just playing himself having a few drinks; Keenan Wynn (The Chairman) orders, FULL SPEED AHEAD!! 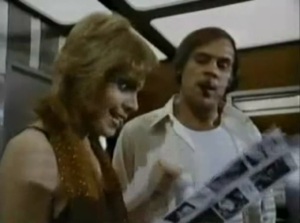 Since the acting is so risible, let’s just concentrate on the train itself.  Apparently, NBC built a huge layout for their Supertrain model to run on.  These shots appear at various times throughout the picture. 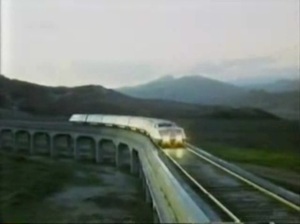 Supertrain blasts out of G.C.T.; Supertrain rolls along the viaduct. 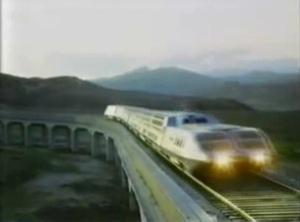 Coming and going shots of the wide gauge luxury train. 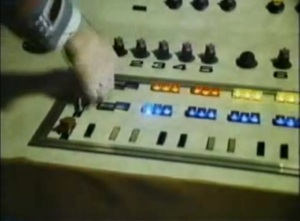 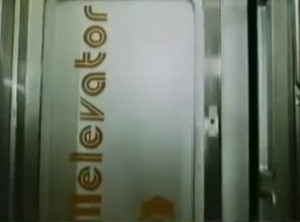 You’ve GOT to have switches, lights and knobs on an atomic train.  I absolutely LOVE the graphics on that elevator. It just screams, “1979!!!” 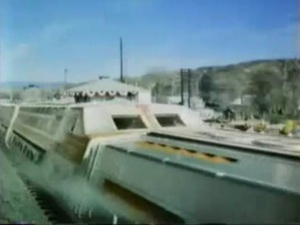 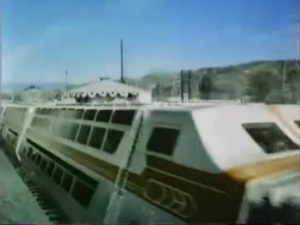 As Supertrain pulls out of Big Rock, we get a good look at the double decker section of the consist….with steam shooting out everywhere! 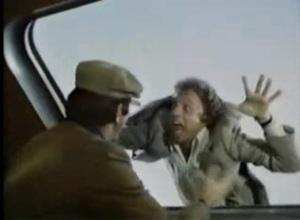 Will the train make it to L.A. in one piece or crash?  Is someone on the train really trying to kill Steve Lawrence?  Is Don Stroud really that bad of an actor?  Will Don Meredith have another bourbon on the rocks?  Purchase this DVD on the internet and find out the not-very-exciting conclusion!

Webmaster, Blogmaster, Ferroequinologist - Lindsay Korst works for a nationwide home improvement center after a 20+ year career supporting computer users. A resident of the Seattle area since 1976, he has had a life-long interest in railroads, particularly those in the Pacific Northwest. He is an enthusiastic participant in the Great Northern Railway Historical Society. He and his wife reside in Redmond, Washington.
View all posts by Lindsay Korst →
This entry was posted in Uncategorized and tagged 1970's, Disco Era, Don Meredith, Express To Terror, Grand Central Terminal, NBC Television, Red Carpet treatment, Steve Lawrence, Supertrain 1979. Bookmark the permalink.