Throw in a crackerjack murder/mystery, a little cheesecake (the wonderfully-trashy Delores Purdy — played by Quentin Dean) and you’ve got a winner.

Let’s re-examine this 1967 classic filmed in and around Sparta, Illinois (standing in for Mississippi) from a railroading perspective and really enjoy the show!

A pair of MoPac EMD GP35’s in the “Screamin’ Eagles” paint scheme lead a freight along the Mississippi River in a scene from the movie. Note the MP “buzzsaw” logo on the cab side and the lack of dynamic brakes (MP was a mostly flat railroad).

In the opening credits we see GM&O #103, an EMD E7A roll into town pulling a baggage car and two coaches. Note the fireman in the cab of #103 is wearing a suit and tie! Wanted to look good for his cameo I suppose… 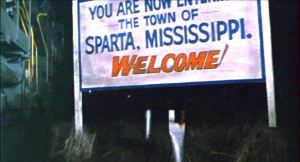 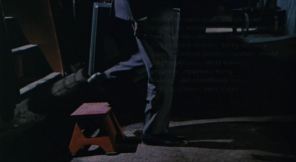 It is so dark, it’s hard to tell, but this appears to be a freight train with gray & yellow EMD Geeps flashing past the Sparta sign (Louisville & Nashville Railroad, perhaps?). It’s certainly not the passenger train. Back with the GM&O #103 consist, Detective Virgil Tibbs (played by Sidney Poitier) walks off a classic railroad step box onto the platform at Sparta depot. 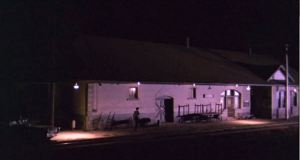 Ordered to check the depot for the murderer, Officer Sam Wood (played by Warren Oates) walks the platform at the classic Sparta depot. Sam peers into the operator’s bay (note the old style train order hoop), then mistakes Tibbs for the murderer. No loafing! 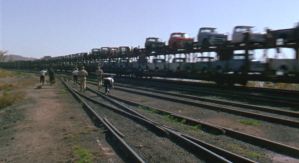 It’s a little fuzzy (the train is really moving), but here’s a trio of MP EMD GP35’s leading an auto train southbound along the Mississippi River. Notice the enormous Southern Pacific Railroad “Hi-Cube Cushion Car” (probably auto or truck parts). As the Sparta police, county sheriffs and hound dogs track a runaway suspect, we see carload after carload of trucks on bi-level auto carriers (at this time, carriers weren’t fully enclosed as they are today). 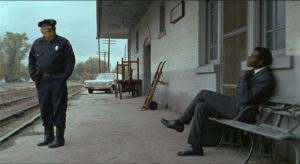 Our next railroad scene is back at the Sparta depot (preserved and now used as an art museum). Chief Gillespie (played by Rod Steiger) walks the platform and tries to convince Tibbs to stay and solve the murder mystery. Good view of train schedules chalked up on the arrival blackboard (Gulf, Mobile & Ohio Railroad – the Rebel Route).

The trains listed are:

Tibbs was originally trying to take the 4:05 train to Memphis when he was arrested.

Note that the GM&O Railroad ceased passenger train operations south of St. Louis by 1960. Filmmakers rented the #103 consist for a couple days/nights of filming in Sparta. 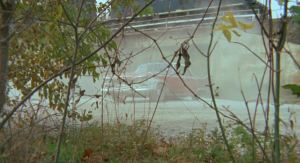 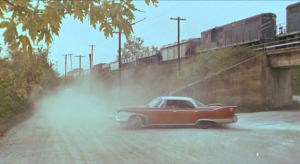 Tibbs finds himself being chased by some local hoodlums underneath a railroad overpass. A very slow-moving Mopac freight train passes overhead led by a couple EMD GP9’s. As a Norfork & Western Railroad hopper trundles by, Gillespie races beneath in pursuit (to rescue Tibbs).  More about the autos later.

Tibbs seeks refuge in what appears to be a small MP roundhouse and yard. Unfortunately, no one seems to be around to render assistance. The shop features a drop pit for servicing locomotives. Great overhead shot of Virgil’s predicament. 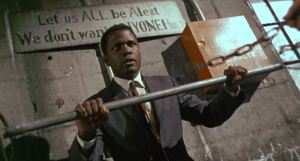 Oh, those old railroad safety slogans….”Let us ALL be Alert. We don’t want ANYONE Hurt!” 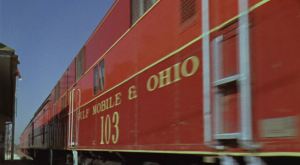 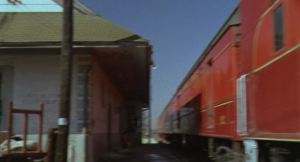 Well-lit shot (finally) of the GM&O #103 and train arriving to take Tibbs home. I just LOVE that two-tone red and gold paint scheme on the E7A. As Virgil gets his grip out of the police car, a classic Railway Express Agency truck can be seen in the background. 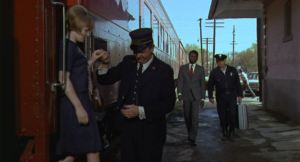 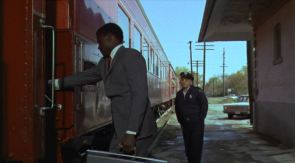 As Gillespie and Tibbs walk the platform, the conductor puts down his step box, assists detraining passengers and checks his pocket-watch in the time-honored tradition.

The train speeds out of Sparta utilizing a helicopter shot of Tibbs on board as the camera zooms back and the final credits roll. 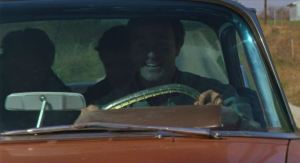 Now, for my brother Mark, who identified them for me, are some really cool automobiles seen in the film. 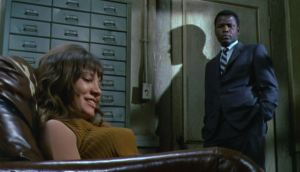 Finally, although it has NOTHING to do whatsoever with anything train-related, but because “she parades around in the nude at night to get her kicks”, presenting the village hussy, Miss Delores Purdy (Va-va VOOM)! Note: Dr. Pepper seems to be the favored drink in this movie.  Must be a Southern thing (turns out it is).

Wasn’t that fun? Do check out this movie if you haven’t already seen it. Plenty of train action (background sound effects including a melodic five-chime horn on the 103) plus the plot is well-written with a real twist at the end.