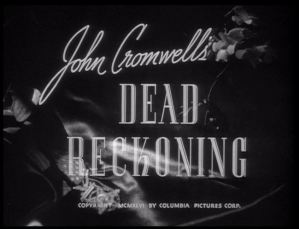 Finally, I found a movie with one of my favorite actors (Mister Humphrey Bogart) on a train. Bogie (as Captain Rip Murdock) is escorting Sergeant Johnny Drake (played by William Prince) from New York to Washington DC where Drake is to receive the Congressional Medal of Honor.

It turns out that Sergeant Drake has a dark and nefarious past and thus has no interest in getting a medal along with all the publicity.

The train scenes occur in the first ten minutes of the picture, mostly on train “sets” with a few outstanding glimpses of Pennsylvania Railroad electric operations as backgrounds.

Take a ride on the Pennsy as it segues into a steamy and mysterious piece of film noir.

As the fireman of a GG-1 electric leans out of the cab for his portrait, Bogie displays his 82nd Airborne patch. This scene was filmed (matte shot) along Pennsy’s four track mainline in Philadelphia, Pennsylvania. 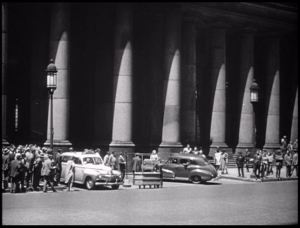 Railroad action commences as the boys are driven (with police motorcycle escort) into New York’s Pennsylvania Station. Notice the huge crowd of people watching the filming from the sidewalks.

See the eagle statues at the top of the first picture above?  There were 22 of them at Penn Station.  There is a fascinating web page on what happened to them. 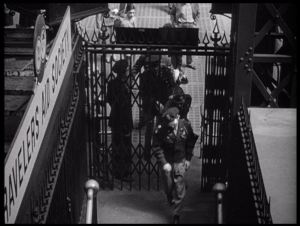 Military types (I’m not sure I see Bogie — probably just 2nd unit filming) hustle along inside Penn Station, through a gate and down to trackside.

Now seated comfortably in a compartment, Bogart/Rip and Price/Johnny watch as the projected trackside views flash past.

Both are puzzled why they were put on this train (The Limited) to be escorted to D.C.

Both Rip and Johnny share closeups with a Great Northern Railway – Western Fruit Express reefer in the background! 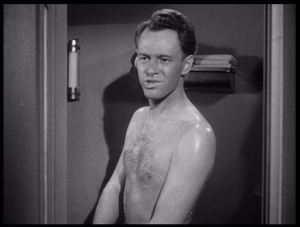 While Johnny washes up in the adjoining bathroom, Rip rummages through Lt. Col. Simpson’s (William Forrest) papers and discovers they have been given a Priority 1A for travel.

Caught! Lt. Col. Simpson steps back into the compartment and finds the boys going through his orders. Bogie buttonholes Simpson/Forrest about the high-priority. 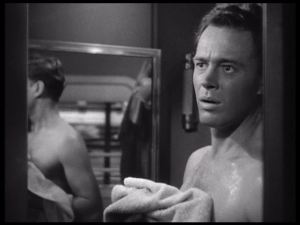 As he buttons his jacket, the Lt. Col. tells Rip that he’s getting a Distinguished Service Cross and Johnny’s getting a Congressional Medal of Honor for their actions during the war. Drake overhears and is nonplussed.

As the train comes to a stop in Philadelphia, Bogie congratulates Drake about being a big shot hero, but strangely the Sergeant becomes agitated saying he doesn’t WANT the medal.

It’s the Press!  Boarding the train, the Fourth Estate wants the scoop on the heroes. Rip comes out on the high-level platform (probably a set) to talk to them. Note the fluted stainless steel coaches. 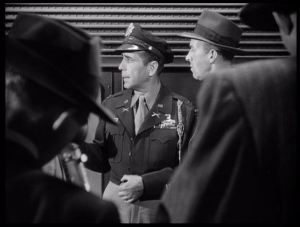 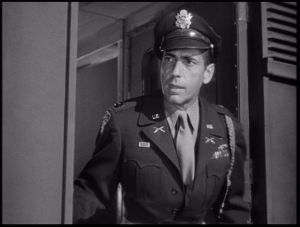 Looking around, Bogie notices that Drake is nowhere to be found and searches the train vestibules.

Back to the heavyweight equipment. Rip spots Johnny running down the tracks after another train. Rip bails off and races along the ties in pursuit. Too late, Johnny has boarded the last car and given Bogie the slip.

Beautiful shot of a GG-1 and train as Bogie’s stunt double gives up the chase. Johnny gives Rip a farewell salute.

One final shot of Rip with a GG-1 looking over his shoulder. 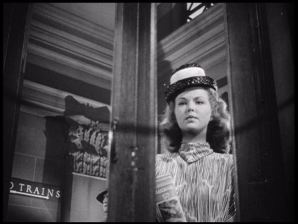 “Sorry, Gorgeous, I didn’t see what you looked like. I’d let you have it (holds out the receiver), only it’s long distance.” `Gorgeous’ is holding a Pennsylvania Railroad timetable.

At this point, Bogie checks into a hotel and that’s the end of the train viewing. The movie itself is a wonderfully tawdry film noir with lots of murder and intrigue.

She’s not in any train scene, but Bogart’s co-star was played by Lizabeth Scott as Coral “Dusty” Chandler, pictured here in the middle of a sordid love triangle. Naturally, Bogie gets involved. “The stuff that dreams are made of”…

Here’s what IMDb has to say about Dead Reckoning:
https://www.imdb.com/title/tt0039305/