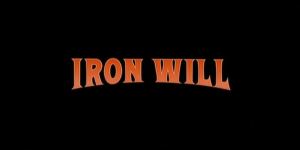 No less than three of my readers recommended this movie to me. Indeed, it is a train-laced adventure throughout and much deserving of the title, “Obscure Train Movie” as I had never heard of it before! Set in the winter of 1917, Iron Will is loosely-based on a Winter Carnival dog sled race from Winnipeg to St. Paul once sponsored by James J. Hill and the Great Northern Railway.

Two of the film’s stars are the hero Mackenzie Austin [seen above with his dogsled racing the train] as Will Stoneman (“Iron” Will…get it?) and Duluth & Northern Minnesota 2-8-2 #14.

Mostly filmed during a snowy and frozen-solid Minnesota winter (January through March 1993, Brrr….) around Duluth, this flick really makes you feel the COLD as you watch it. Prop up your feet with a mug of cocoa and enjoy! 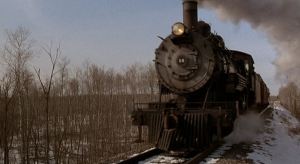 D&NM #14 marches along on a clear and cold day somewhere in the “Arrowhead” region of Minnesota. The little 1913 Baldwin 2-8-2 posed as several different locomotives by changing the front number plate (#807 is one number I was able to make out). 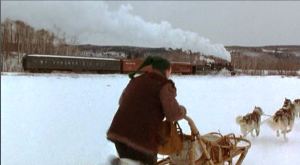 Our picture opens with Will racing #14 and train into the little town of Birch Ridge, South Dakota.

Without giving away too much of the plot, “circumstances dictate” that Will enter the Carnival Derby to win the prize money. The filmmakers did a nice job of incorporating old Great Northern Railway logos into the story. 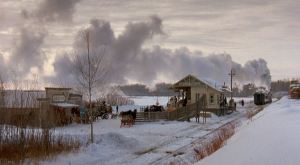 Next thing you know, Will and his team are leaving Birch Ridge for Winnipeg to compete in the race. 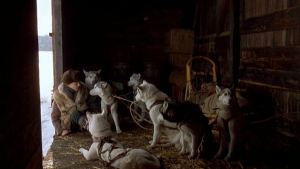 How did Will stay warm in that boxcar? Just think of the 1970’s group, “Three Dog Night” and you’ll get the idea. Beautiful, back-lit shot of #14 and train crossing a frozen-over river.

The next morning, Will opens the boxcar door to see a steam engine taking a spin on the turntable. 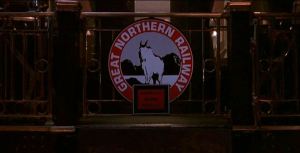 In marked contrast, J.W. Harper (played by David Ogden Stiers) and cronies enjoy cigars and brandy inside the opulent interior (look at all that polished wood!) of their private car. Filmmakers used the former DM&I Railway business car, Northland. The car was given a nifty forward-facing goat logo on the observation platform. Rocky has no eyes! 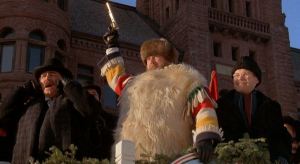 Harper pontificates as the “flashbulbs” go off. That woolly mammoth/Hudson’s Bay blanket-style coat he’s wearing was how many dressed during the early Winter Carnivals. Very nicely-done “See America First – Glacier National Park” sign on the podium.

And they’re off! Just like during the early days, a “chase train” followed the mushers at places where the tracks paralleled the route. Posing for a formal portrait alongside a nicely framed map of the Winnipeg-St. Paul route. Briefly, Will takes the lead and pulls up alongside the steam engine. 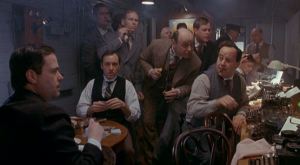 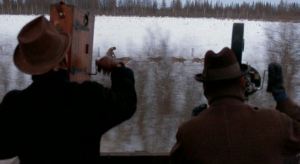 Inside the “press car”, the media reports on the race including taking hand-cranked movies of the action. Final going away shots as the train chases the mushers. 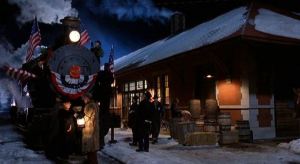 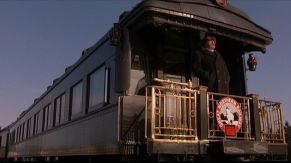 Beautiful night view of the #807 posing alongside a depot. The next morning, Harper takes a break on the back of the Northland.

The reporter who broke the story about Will, poses with his headline. #14 simmers next to yet another depot. 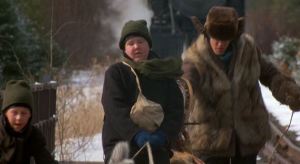 I saw this scene and thought, “Oh brother….”. Lifted straight out of 1986’s “Stand By Me” movie is the infamous kids-trapped-on-a-bridge bit. Traaaaaaiiiiiinnnnn! (alt.ensign.wesley.crusher.die.die.die)

A TREMENDOUS amount of plot left off HERE. 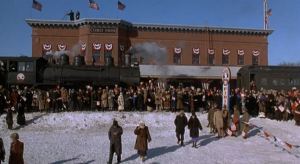 Well, here we are at the finish line.  Harper and the boys are still hitting the sauce and nicely bundled up against Old Man Winter. 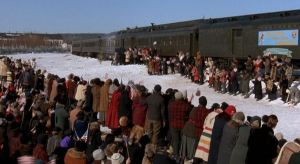 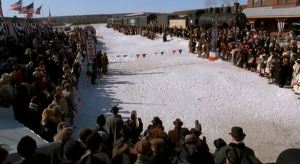 It’s a beautiful day with a cast of hundreds and a couple good views of some railroad equipment to end this review right here.

Iron Will was a very enjoyable picture. Definitely a film for the whole family with enough villains and tragedy to keep it interesting. The filmmakers get mega-kudos for their extensive use of railroad equipment and steam-powered runbys. What happened, you ask? Well, you’ll just have to get your own DVD and find out. And now I think I’d like to go pour a snifter…